My innings at the John Keells’ crease

“To be humble in victory and gracious in defeat” is a lesson that is etched in my mind. For me a sport is more than just a game. It’s full of life lessons about faith, discipline, pride, passion, trust, unity and much more.  I know how important it is to have sporting role models when you are young. It gives you focus and dreams to aspire to. I too had my icons: Shane Warne, Australian Cricketer. We learn from these legends, wittingly or unwittingly. You hear about their “sporting moments” of triumph and defeat, and read about the inspiring cover page stories of world-renowned sportsmen – wishing that it were you. Unlike other teenagers, I did not have the “dream” of becoming a professional sportsman. I went beyond sports.  I was able to extend my experience in sports as the Cricket Coordinator at John Keells Group Sports Club along with a career that I am passionate about in the Leisure Industry.

As far as I can recall, my involvement in sports started when I was two years old. Now it is interesting to see the two-year-old Terrence holding a bat upside down and posing away to the camera. Although cricket was my first preference, I was a keen follower of rugby. Luckily or unluckily, school junior cricket matches always clashed with the rugby season, so I stuck to cricket. However, after joining the John Keells Group, I got the privilege to play both cricket and rugby.

Sports is an integral part of any organisation. I humbly disagree with the saying “It’s all work and no play.” Most mercantile establishments recruit people who can contribute to an organisation’s success whilst considering their performance on the field.  Folks, after looking back at the history of John Keells stalwarts, I don’t think anyone can say they are busy and have no time for sports. Best examples at John Keells are our current Chairman and Deputy Chairman: both have outperformed in both categories – work and play. 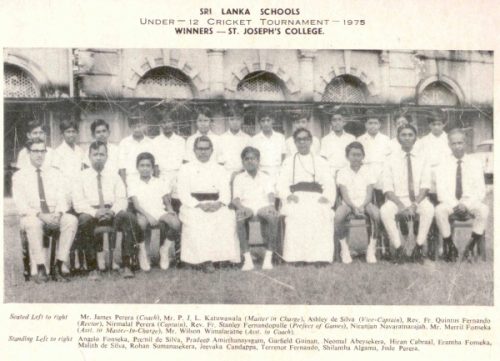 It is delightful to recount the unforgettable moments of the past. In the early 1980’s most companies employed sportsmen, and I believe my participation in sports helped me find employment at John Keells. It gave me an opportunity to get to know many cricketers across the Group: people with whom I still maintain cordial relationships.

Once I registered to play for John Keells in a Mercantile F Division Cricket tournament. My team was captained by Susantha Ratnayake, the present Chairman of JKH, and we emerged champions that year!!!  Others who represented John Keells and are still in the Group include: Michael Elias, Jayantissa Kehelpannala, and Roshan Gurusinghe. I must add that Roshan was a very fast bowler when he was younger – and a whole lot slimmer!

I remember like it were yesterday, when we used to play half a day (30 Overs) cricket matches over the weekend and have a couple of beers (or was it many?!) after every match. In some cases, beers were had before the match! Good times! Now-a-days, it is heartening to see the same enthusiasm in the young chaps, within and outside the Group. There are several who attend rugby and cricket practices regularly despite their inability to make into the final team. I consider them to be passionate and loyal members of the pool! I am sure you have heard the saying that the only place where “success” comes before “work” is in the dictionary. Winning everyday is one thing, but the willingness to improve and the will to prepare are vital.

Like everything else in this world, sports has also evolved. Clearly, the pictures in this blog say it all! In addition, standards have obviously changed over time with professionalism playing a major role. Cricket, the sport that I am most familiar with, has evolved considerably. Now we play ‘A Division’ in coloured cricket kits. Back then when I represented John Keells in the ‘A Division’ there were not even helmets to protect our heads!!! Our top management has laid the groundwork and set an example by representing the Group and winning tournaments at the highest divisions. This is our key strength and motivator. In order to encourage participation in sports, we have made all employees eligible to participate in any sport, provided they have the required skills to be in a team. Sports is not something you can do every day, so the young ones should put their talent to good use when they are still young. It is a simple formula: sweat plus sacrifice equals success.

The upshot? Representing both school and company in sports has widened my circle of friends and enriched my life.